For almost a year, now, I have been working on a collection of erasure poems (which may also be called “found poems”). An erasure poem is formed by working with an existing text —any sort of text: a story, a book, a letter, a code, a dictate—and erasing therefrom words, phrases, whole sentences and paragraphs, while keeping select others. The poet might use a tool, such as a black sharpie or Wite-Out liquid, or paint or collage, to physically erase the text. The erasure poem, in a way, is a kind of thievery, which may be a kind of crime, but one perpetrated for the sake of what remains. That is, the remaining text. What remains in my poems ordinarily reflects, contradicts or enhances the original text.

The Oxford Dictionary defines “erasure” as: 1. The removal of writing, recorded material, or data; or 1.1 The removal of all traces of something; obliteration: ‘the erasure of prior history.’

As I think about erasure within the context of our current political climate, it’s been challenging for me to go on with this project, to wipe out words from the source text. It feels wrong in light of what must be considered: an ignorant, narcissistic, racist, misogynist, homophobic, xenophobic, intellecto-phobic, president-elect who will too soon occupy a chair in an oval office in a white house in the capital city of the United States of America, land of the free. A president-elect who has already betrayed this country in countless ways—most notably, in ways that call for the witing-out of millions of Americans whose skin is darker than the palest pale. And so I am forced, now, to think about erasure in terms of 1.1 above: obliteration. This is the politics of erasure: denying the validity of a given race or any other whom does not reflect the face of the eraser. To erase anything is a form of obliteration. When the day’s history lesson is erased from the classroom’s blackboard, it is obliterated.

Last February, The New York Times Magazine published an essay titled Fighting ‘Erasure’ by Parul Sehgal. In it, Sehgal wrote, “‘Erasure’ refers to the practice of collective indifference that renders certain people and groups invisible. The word migrated out of the academy, where it alluded to the tendency of ideologies to dismiss inconvenient facts, and is increasingly used to describe how inconvenient people are dismissed, their history, pain and achievements blotted out. Compared with words like ‘diversity’ and ‘representation,’ with their glib corporate gloss, ‘erasure’ is a blunt word for a blunt process. It goes beyond simplistic discussions of quotas to ask: Whose stories are taught and told? Whose suffering is recognized? Whose dead are mourned?”

Erasure is what Trump is talking about when he says he’s going to build a wall, or prevent certain ethnicities, or those with certain religious affiliations, from entering this country. Erasure is Trump populating the White House with white nationalists. Erasure is the abolition of diversity, histories, innocents, traditions, language, color, poetry. Erasure is loss. It is our president-elect’s desire to lose the idea of freedom, or morality, or humanity. Which is not a particularly novel idea or response by those keen on running a country by means of tyranny.

The practice of erasure in politics is a worldwide crisis.

I believe it is an artist’s duty to speak out against cultural erasure, to bring light and truth forward through one’s art. Looking at the body of my erasure work, I think, in large part, that what I have been pursuing (consciously or not) is the gravity of survival, renewal and remembrance—poems that reveal the stories, suffering and mourning of all. Poems composed of glittering fragments of hope and love and compassion.

A poem from my collection in progress: 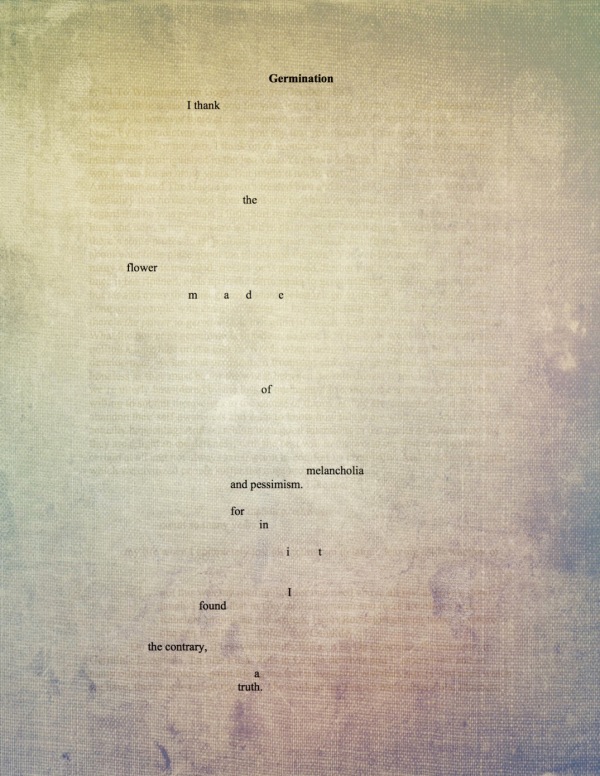 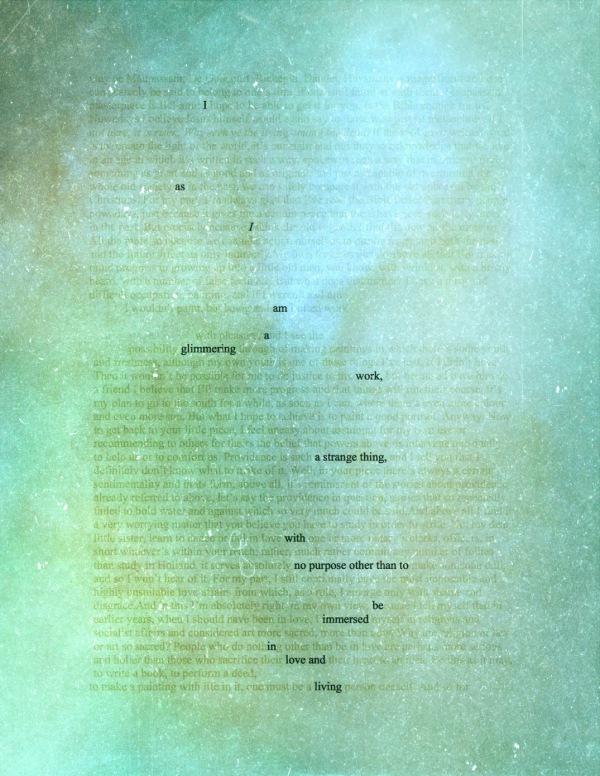 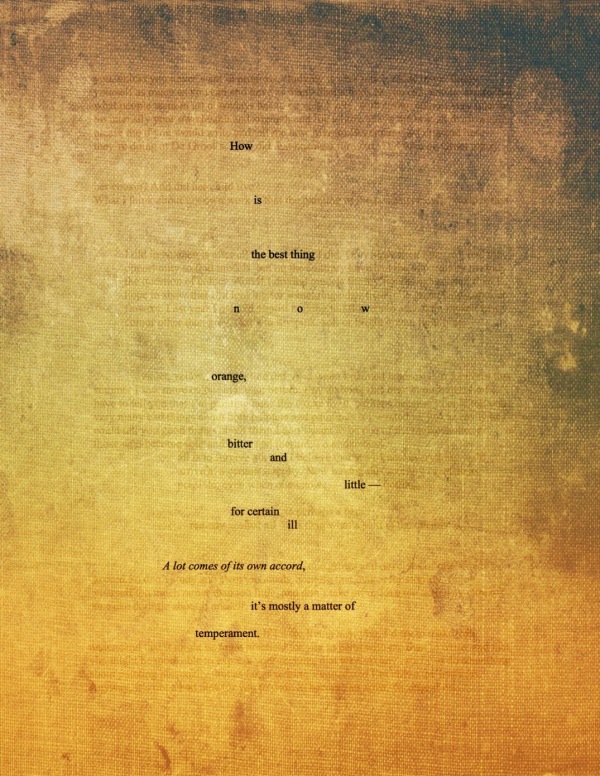 Ginsberg: Yacketayakking. Stolen nights,
breathing boxes, tubercular skies. From the ash, a
flower does rise, stares you down, right surprise.
The opposite of ripe: withering grey sunflower,
brittle smoking pipe.

Look at that sunflower. Man. A hint, a message,
a hope. Lest we forget—obliterate memory of
things gold, honest, gasping. Gasping,
gasping for glint, a stalk (even a dead stalk)
to climb, into clouds, above smog and
rotten soil, crude oil. Breathe, breathe.

Take the flower. Hold the flower. Be the
flower—sun and glean, son of dream. Take the
shadow of it home, specter and shade, pull
it from sawdust, a yellow-star bone, a banana
dock sermon.