I’m happy to report that my latest work, Zn—an erasure poem—is up at Rappahannock Review, and here it is, below. Inspired by Vincent van Gogh’s letters, Zn is part of my erasure poetry project—an endeavor that is slowly coming to fruition. I was also interviewed by RR’s kind Poetry editors, and if you’re interested in reading the same, you can find it HERE.

I am so very grateful to the folks at Rappahannock Review for taking in my little poem, and for granting me my first literary interview.

It’s been a long time since I’ve felt compelled to write. In fact, I don’t actually feel compelled to write, and I’ll tell you why: I struggle with the great void, and wonder if  any singular voice adds one iota of worth to the grotesque narrative playing out in this country. We are in a perpetual state of deeply disturbing hostility, an inane and unnecessary protracted battle for common sense laws—and it’s personal to many of us. Our nation has been hijacked by thugs—racist, homophobic, narcissistic, greedy, morally corrupt criminals who are raping and pillaging our country (that’s the short list)—for their own personal gain.

ENTROPY. A doctrine of inevitable social decline and degeneration. Look it up, it’s in the dictionary.  I read too much and I think about this too often, this mad —and I mean that in every sense of the word—country of ours. I’m angry, I’m likely depressed. I want an answer to: How do we wrestle the reigns from these evil forces?

But, here’s the thing, I don’t want to write about our sad state. I don’t want to write at all. In any event, there’s enough good and honest reporting by the best of media outlets (by which I mean The New York Times, The Washington Post, The Guardian, The Atlantic…). I believe that most of us know where lies lay like dirty bombs, and we see and hear the fallout of explosive rhetoric and fake news. So, no, I don’t want to add to that void. I want to make art and love and humor and empathy and joy. Yes, joy! And I have a hunch that if we all create more uplifting and constructive matter and deeds, we will eventually rise from our charred, psychopathic, Beckett-like landscape where nothing nurtures and everything important is neglected. Do you know that the words beneficial and helpful are synonymous with progressive? Whether you like or not, true.

This is all to say, here’s some art, my art—an erasure poem/collage (minus the frame). I’m sharing it with you. It’s a piece that’s currently hanging in Art League Rhode Island‘s 2018 Members Exhibition in Warwick, where it was given an Honorary Mention. Sharing art feels a whole lot better than shouting into the void. 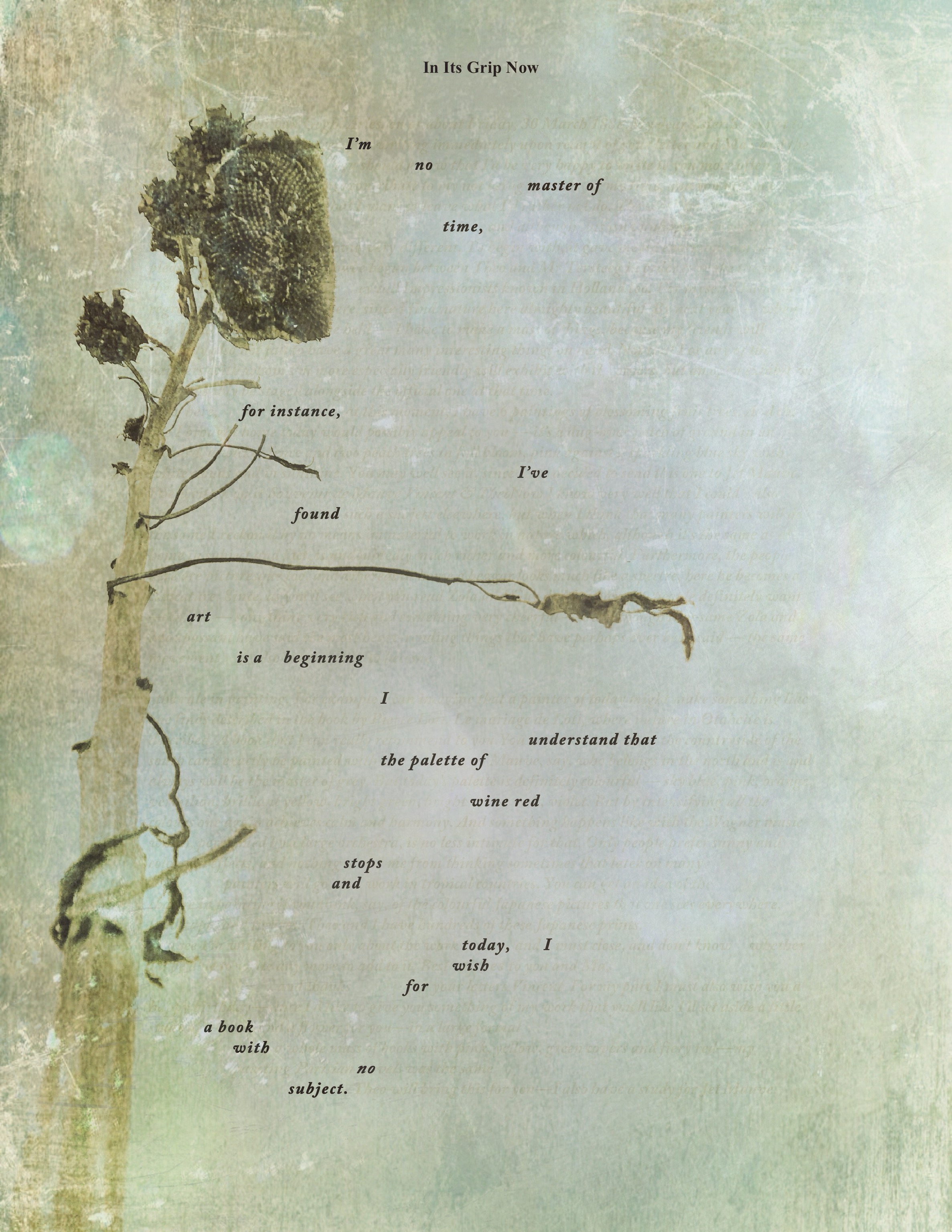